Pre-Show Notes
-Richmond, Virginia. Greater Richmond Convention Center. October 26, 2014.
-Jimmy Jacobs challenges Icarus for the Chikara Grand Championship!
-Tonight’s Bond movie was of a Roger Moore persuasion. Apparently Moonraker was really average, but made boatloads of cash. It’s the one in SPACE! I seem to remember playing Nightfire, which shared some settings and character types. It might have been my favorite non-Goldeneye Bond game.
-Real talk: If Jacobs doesn’t win, how or why is the Flood even a thing. Is that too extreme at this point? Doesn’t the Flood have to do something at some point other than kill of a few ancillary wrestlers? Regardless of what happens tonight, this storyline has the feeling of a multi-year arc. I get the feeling that “Tomorrow Never Dies” is going to unload something big on us.

Missile Assault Ant used his strength and technical ability while Shynron used his ability to flip. Missile dominated until Shynron came back with some aerial maneuvers, finally winning with the second rope 630 Senton.

That finisher will never stop being impressive, but Shynron still has a lot of work to do. He was much better in this match than the Silver Ant match at “Thunderball,” but there were lots of times where it seemed like Shynron didn’t quite remember the sequence and left Missile Assault Ant awkwardly waiting to take a move. 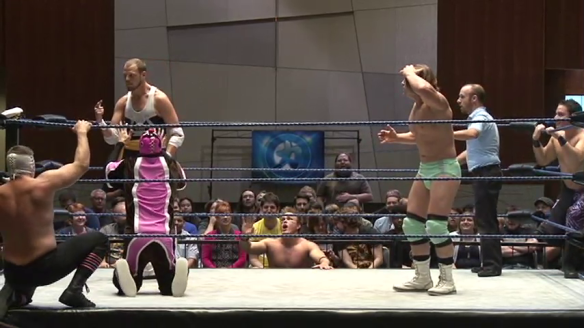 Archibald Peck, Ice Cream Jr., Mark Angelosetti & Shane Matthews vs. Ashley Remington, Dasher Hatfield, El Hijo del Ice Cream & Scott Parker
So, let’s get this straight: The four wackiest teams and friendships in Chikara are being split onto opposite teams. There is no way this isn’t the best thing ever…

Everyone began against their better half. The Throwbacks had a crazy grappling sequence, 3.0 had a stalemated lockup, Los Ice Creams had an awkwardly long hug, and Ashley Remington and Archibald Peck broke up that hug so they could have an awkwardly long hug of their own. Ashley busted out the gun fingers, accidentally shooting Peck in the stomach! Peck tried to get revenge, but END_OF_DOCUMENT_TOKEN_TO_BE_REPLACED 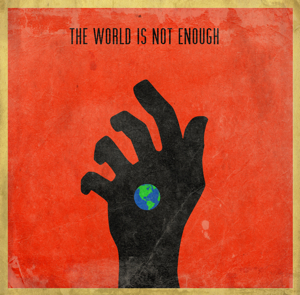 Pre-Show Notes
-7.20.2014. Wonderland Ballroom. Revere, Massachusetts.
-This is the second and final Chikara show of July. “The Living Daylights” was held in New York the day before.
-Title match tonight! Plus, Icarus returns to action after missing June with a concussion.
-Wow. That’s a looooooow ceiling… Good thing no one on the card likes to fly. Word is that they were moved from the actual ballroom to the bar for some reason.
-Danielle Matheson did a road diary for this show. It’s amazing and you should read it.
-Is this a bad time to mention that I liked Pierce Brosnan as James Bond? Let’s see if Christmas comes more than once for Chikara fans tonight!

3.0 (Scott Parker & Shane Matthews) defeated the Odditorium (Oliver Grimsly & Qefka the Quiet) via Pinfall
3.0 had me in tears to start as they made fun of the low ceiling and the sound effect bell-ringing. This was a nice match to start the show, although it felt way shorter than it could or maybe should have been. 3.0 won with the Sweet Taste of Professionalism at 5:35.

The Odditorium continues to be Circus Slaters, not really a threat to anyone. But, that’s pretty obviously not their job this season. If their job is to make their opponents look good, they’ve been doing great work all year. In fact, they probably deserve a raise.

Ashley Remington defeated Archibald Peck via Submission
Yet another thumb war segment ended up on the official MP4. I’m not sure what these are doing on the final cut, but thank goodness the two twenty-something dudes jobbed to the little kids.

Archibald Peck came out and Halperted the hard cam when the low ceiling kept him from finishing his entrance. Ashley Remington was still sailin’ smooth, although we did get to see a little anger flair up before he smoothed it over with a few deep breaths. Remington and Jervis Cottonbelly have somewhat similar shticks, but this was the first time we’ve seen either wrestle another tecnico. If you don’t love Smooth Sailin’, we can’t be friends.

Everyone loving Ashley Remington might be my favorite gag in Chikara right now. Even Bryce Remsburg and Archibald Peck were smitten with Remington, culminating in a three-way hug that included joyful jumping. This GIF, you guys. Everyone, that is, except Chuck Taylor, who END_OF_DOCUMENT_TOKEN_TO_BE_REPLACED