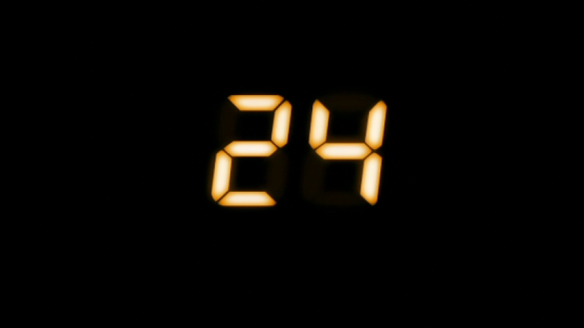 24 is a groundbreaking and important television series. Beyond the thrills, kills, twists, and tragedies is a show that reached a new level of serialized storytelling and set the bar for action and suspense on network television. Lasting for 8 full seasons and one “limited series”–204 episodes plus a TV movie–24 is one of the longest-running shows of the past 15 years. Others, like Grey’s Anatomy, NCIS, Smallville, two CSIs and two or three Law & Orders, may have run longer, but the argument can be made that none of those shows are equally as worthy of contributing to the debatably labeled and vaguely-defined “Third Golden Age of Television Drama” that began with The Sopranos in 1999 and is now fading with the end of Breaking Bad and the impending finale of Mad Men. Perhaps 24 doesn’t quite reach the dramatic heights of those shows, or others like The Wire and Deadwood, or even The Shield, Lost or Battlestar Galactica, but it was always a strong awards and ratings contender and it was just so addicting and fun to watch.

From September through May, we – Patches, Zach, Jeff and MegaMix – looked back at 24, discussing one season per month until the premiere of the 12-episode miniseries 24: Live Another Day, which we subsequently discussed in a series of “ReJacktions.”

This month’s discussion is focused on Season 9 of 24, aka Live Another Day, which concluded July 14 after premiering in May of 2014.

The 24pion and the Stud

Once upon a time, a remarkably handsome man came upon a large stream, wishing to cross to the other side where he could find the best shows on television. The current, however, was swift and the Stud knew swimming across would require all his strength.

“Perhaps you could help me. I also need to get to the other side, but I can’t swim.”

The Stud, surprised that he wasn’t alone, looked down to see a 24pion. “Why should I trust you?” the Stud asked, “You’ll sting me with obstructionist bosses and other inconveniences that exist only to kill time. Leads will appear only slightly less randomly than family members we didn’t know existed. They’ll be moles and presidential leadership issues. I don’t want any of that.”

“Why would I do those things?” answered the 24pion. “Then we would both drown.” The Stud gave the 24pion a skeptical look. “Really,” the 24pion insisted, “my metasoma is ‘limited run.’ I don’t need any of those things. I could set on your back while you swim across and it would just be a tight, simple, fun story. You’d trust a BSGila Monster or a Justifieding Fox or a Wireus — Yeah, Wireus works — You can trust me.”

Despite his otherworldly attractiveness, the Stud wasn’t much of a swimmer. However, he could adequately backfloat. The 24pion climbed onto the Stud’s washboard abs and the two set off. As the pair made it about halfway across the stream, the 24pion’s tail snapped downwards, piercing the Stud’s skin and releasing six or seven episodes worth of venom.

“Dammit!™ Why did you do that?” the Stud cried as his strength faded, sinking manly-yet-well-kempt-beard-deep into the stream. Now we will both drown.”

The Moral of the Story

Much like the original story’s titular frog, I forgot or ignored the nature of what I was dealing with. I let The Wire, Justified, and Game of Thrones convince me that we were going to get some flagship HBO version of 24.