Pre-Show Notes
-2300 Arena. Philadelphia, Pennsylvania. January 25, 2015.
-Welcome back, Chikara! And welcome, everyone, to Season 15!
-I’m back! I started doing these reviews last year because no one else was and nature abhors a vacuum. There still appears to be a vacuum, so here I am I guess….
-“A New Start” seems like an appropriate title after the “resurrection” of Chikara and the success of their subsequent campaign for survival. It’s an imperfect analogy, but think of the resurrection as the American Revolution and Season 14 as the War of 1812. I think that makes King of Trios the Burning of Washington D.C. and Kingston’s defection as the Battle of Lake Champlain? I’ll show myself out…
-Speaking of Season 14, feel free to check out my reviews from 2014.
-This year’s title theme is Arrested Development, which is a show I’m meaning to get around to SO HARD. Unfortunately, there’s probably several dramas on my queue before my top comedies.
-The sound mixing was not particularly good on the MP4. The announcers were WAY louder than the crowd and the action in the ring. It’s tough to invest emotionally if you don’t feel surrounded by the crowd. At least Chikara’s announcers are fantastic…
-The Camerawork was kind of sketchy as well, although that seemed to be the result of having no good place for the hard-cam, which was set up really far away from the ring.

Jonathan Barber checked the inflation of Mr. Touchdown’s football to start, which was probably a decent joke on January 25th. On February 10th, not so much. Thankfully, Dasher busted out an old-timey air pump to save the day. Joke status: Rescued. END_OF_DOCUMENT_TOKEN_TO_BE_REPLACED 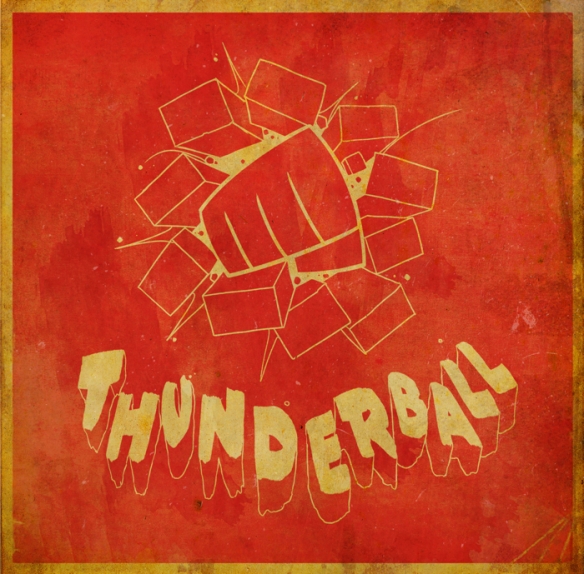 Pre-Show Notes
-Gibsonville, North Carolina. The New Mid-Atlantic Sportatorium. October 25, 2014.
-I went to North Carolina for the first time two summers ago. Great place, good people.
-You’re welcome.
-It’s the first show after King of Trios 2014! Notable happenings included:
1) The reformation of the BDK under Jakob Hammermeier.
2) Jigsaw departing Gekido and the Flood.
3) The unmasking of Deucalion, revealing a scary killer with no irises.
4) A Devastation Corporation victory, allowing the Flood to leverage that into THINGS!
5) Eddie Kingston paragon interrupted Jimmy Jacobs, quitting the Flood, which he had joined only a month before.
-On an unrelated note, I love Mass Effect.
-Tonight’s Bond movie is a Sean Connery selection. Anything I know about it comes from a Mad Magazine parody entitled “Thunderblah.” I found my dad’s old collection in the attic as a young man.
-Solid crowd tonight. Decent venue too, other than the Confederate flag inlaid on some other flag across the hard camera.
-King of Trios fallout time!

The Spectral Envoy (Frightmare, Hallowicked & UltraMantis Black) defeated the Bloc Party (Mr. Azerbaijan, Prakash Sabar & the Proletariat Boar of Moldova) via Pinfall
Both of these teams are looking for redemption tonight after being eliminated in the first round of King of Trios; Bloc Party by Team UK and the Spectral Envoy by the Flood.

Also, OH MY GOD, YOU GUYS! MR. AZERBAIJAN IS CHUCK TAYLOR! No wonder he won all those Azerbaijan Sexiest Man Contests… Seriously, what a credit to Chucky T that he is able to wrestle in such a completely different style that I never noticed before tonight.

Frightmare was picked on and isolated early, as is his custom. He finally reached his partners, only for both of them to eat Gores from the Proletariat Boar. UltraMantis got beat up until Frightmare toped everyone and sent Mr. Azerbaijan into a Rydeen Bomb for the win.

Solid match. There was little doubt as to the winners, but it was worth the ride. 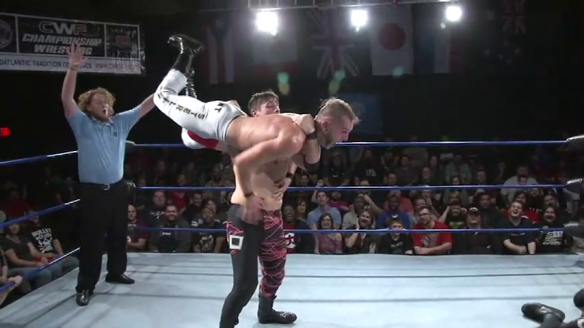 3.0 (Scott Parker & Shane Matthews) defeated the Aftermath (Chet Sterling & Trevor Lee) via Submission
The Aftermath are a couple of local guys. I can assure you that Trevor Lee will not be local for long. He is ripping it up in PWG right now. 3.0 sits at two points and will earn a title shot with a victory tonight.

The Aftermath attacked 3.0 to start things off. END_OF_DOCUMENT_TOKEN_TO_BE_REPLACED

Pre-Show Notes
-Palmer Center. Easton, Pennsylvania. September 19, 2014.
-King of Trios, ladies and gents, the greatest weekend in professional wrestling. Three years of tremendous wrestling, great comedy, and fantastic storytelling.
-Last year, The Spectral Envoy defeated Team Ring of Honor in the Finals to secure the Trios Medals for Chikara, and finally giving fan favorite UltraMantis Black some tangible recognition in Chikara. It was also, in my opinion, the best King of Trios in the history of King of Trios.
-King of Trios is actually what brought me to Chikara in the first place. Between the praise given to the tournament by Brandon Stroud and noticing that the 2009 Tournament featured Bryan Danielson AND Claudio Castagnoli in a trios called Team Uppercut, I knew I had to check it out.
-Tonight, it’s all first round action! Eight trios matches.
-No Bond references this week.
-One day, I am going to go to King of Trios. It probably won’t be for a couple more years, though. Maybe that should be my gift to myself for finishing graduate degree number two? 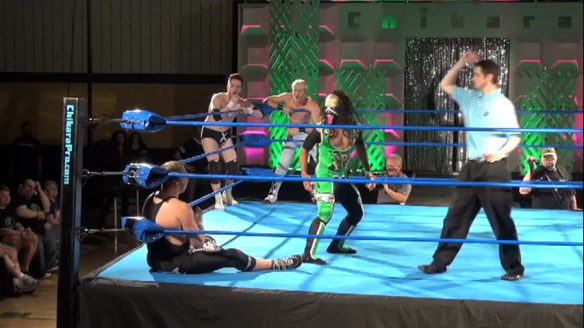 Team UK (Damian Dunne, Mark Andrews & Pete Dunne) defeated The Bloc Party (Mr. Azerbaijan, Prakash Sabar & The Proletariat Boar of Moldova) via Pinfall
Sean Waltman, occasional Trios participant, was weirdly on commentary for a few matches. He made the requisite jokes about Prakash Sabar, whose gimmick is Arabic X-Pac, and kept apologizing for being speechless. Waltman was a member of Team WWF in 2012 and was defeated by El Generico in the 2011 Rey de Voladores Finals.

Bloc Party controlled most of the match, which included a pretty awesome pump-handle into an Implant DDT. Team UK showed a lot of heart, persevering through a pair of Gores to get the win with a Shooting Start Press. Nothing terribly special, but a nice match to kick things off. 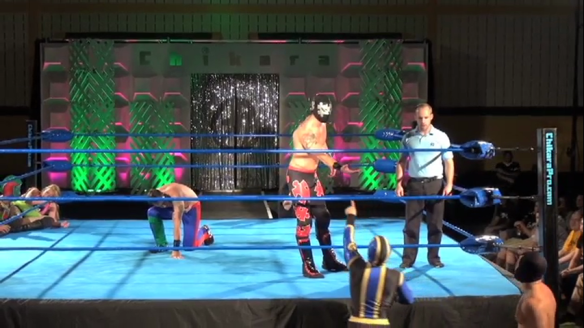 GEKIDO (17 & The Pieces of Hate (Jigsaw & The Shard)) defeated Knight Eye For The Pirate Guy (Jolly Roger & Lance Steel & Princess Kimberlee) via Submission
Great choice for a first round match-up here, especially for those who have followed their rivalry at Wrestling Is Fun! In a pre-show promo, Shard said he has a lot to prove. Jigsaw told him to stay focused. 17 insisted he’s calling the shots for his team, which will certainly not play a role in their defeat.

Interestingly, Jigsaw was in a similar position as he was in 2012 when he was in the tournament with a distracted, vengeful Mike Quackenbush. Also of note, Jigsaw and Jolly Roger are real life brothers. As it turns out, that mattered. END_OF_DOCUMENT_TOKEN_TO_BE_REPLACED 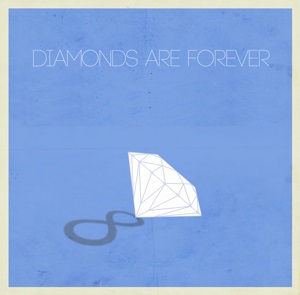 Pre-Show Notes
-June 21, 2014. Logan Square Auditorium. Chicago, Illinois.
-This is the second Chikara show of the day. “Quantum of Solace,” my very first Chikara show, was held early afternoon.
-While writing my “You Only Live Twice” review, I watched the clip from “Zelda the Great” where Mr. Touchdown murdered Sapphire. First of all, it got very dusty in my house very suddenly. Secondly, I noticed that the surroundings looked familiar. Yes, Sapphire perished this very venue. I’m glad I didn’t know that or else I might not have been as happy to see Latvian Proud Oak.
-Here’s hoping the Titan of Titor, now known as Deucalion, doesn’t toss Silver Ant in a bag and murder him to death tonight. The too long;didn’t click version is that Deucalion is a mythological survivor of the great flood, sort of like a Greek Noah. The Great Flood/The Flood… It’s like someone at Chikara reads books or something.

Chuck Taylor defeated Shynron via Pinfall
A bonus match featuring these two was at the end of the video. Given the sparsely populated crowd, I’m assuming it was the Expansion Pack held between the two shows. Hilarity ensued as Taylor was accidentally introduced to Right Said Fred instead of his normal Harlan County fare. Chucky T wasn’t a fan.

To my great chagrin, a contest-winning eleven year-old joined Leonard Chikarason on commentary. I don’t know if it’s this kid or all eleven year-olds, but he couldn’t enunciate and used the phrase “epic fail.” This is the worst.

Have I mentioned I hate little kids?

Listening to the match was brutal, but watching it was another story. END_OF_DOCUMENT_TOKEN_TO_BE_REPLACED

Introduction
-May 25, 2014. Palmer Center. Easton, Pennsylvania.
–This is why I love professional wrestling. You should probably read this so you understand my wrestling values, if you will.
–This is why I love Chikara.
-I didn’t plan on reviewing Chikara’s 2014 shows. However, it’s been a week and Googling “Chikara Diamonds Are Forever Review” returns zero reviews. I like doing things that no one else seems to be.
-You’re not going to get star ratings or hold by hold replays here. I’m going to focus on match quality and how it works with the characters and the stories Chikara is trying to tell. If it sounds good, buy it and watch it! You can find pretty much everything Chikara has ever done on Smartmark Video. They are good people.

The Ashes of Chikara
The Ashes of Chikara is a feature-length film that tries to bridge the gap between “Aniversario: Never Compromise,” where Chikara was “shut down” by evil Director of Fun Wink Vavasseur, and National Pro Wrestling Day, when Chikara was reborn, repelling The Flood, a group of rudos bent on destroying the last remnants of Chikara.

It’s incredibly ambitious and had the potential to be great. After all, the story of a bunch of evildoers slowly destroying the things we love seems like a great blueprint for drama. Unfortunately, it suffered from horrific execution. END_OF_DOCUMENT_TOKEN_TO_BE_REPLACED