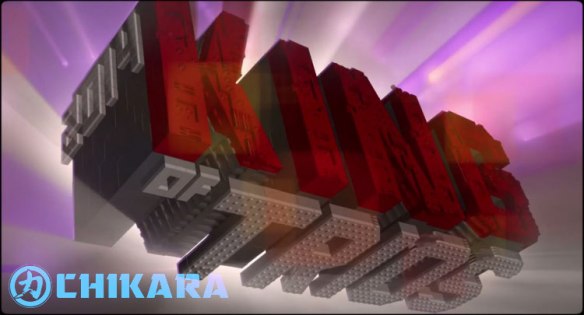 Pre-Show
-Palmer Center. Easton, Pennsylvania. September 20, 2014.
-Rey de Voladores (King of Flyers) returns! The four-way between Kota Ibushi, Jigsaw, El Generico, and Malachi Jackson from 2009 is on my shortlist of the greatest matches I’ve ever seen.
-There’s not much to be said here that wasn’t said before, so let’s break down the remaining teams.
WON’T WINS:
GEKIDO: Internal dissention between Jigsaw and the others
Team UK and Spirit Squad: Do I need to explain?
The Colony: Injury to Worker Ant, already won tournament
MIGHT WINS:
3Peck0
Might win because…Happy, they all deserve it, would be victory for Chikara, sort of unpredictable
Might not because…Maybe too happy, hard to take them over the Flood team
The Flood
Might win because…Deucalion, Jacobs, and Kingston are the big bads of the Flood, lots of potential distractions, story needs the drama a major victory would bring
Might not because…Volgar wins King of Trios
Golden Trio
Might win because…They are the top three guys in Chikara
Might not because…They already have all the gold. what’s the point of more?
Devastation Corporation
Might win because…Big and scary, seem like they are going to be around a while
Might not because…Haven’t been around long enough to “deserve” it, more intriguing Flood option on the table 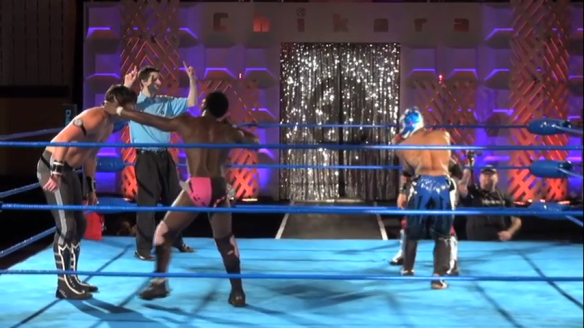 Shynron defeats Chuck Taylor, Rich Swann, and Tigre Uno via Pinfall in a Rey de Voladores Four Way Elimination Match
I am so excited to see Rey de Voladores back. I’m also excited to see Rich Swann. When he was here in 2011, he was just a flippy dude. Now, he’s one of the better wrestlers in North America. It was also an inspired, if easy, decision to put Taylor and Swann together. They were stablemates in Dragon Gate USA for a while. Swann is greeted by the Chikarmy with his familiar “All night long…” chant.

Taylor cut a hilariously racist promo before the match. I can’t hate this guy. I just can’t. Tigre Uno is here from TNA. All I ask is that Shynron doesn’t win simply because he’s the Chikara guy. If you want to honor the real King of Flyers, either Swann or AR Fox is your winner.

To summarize, there were lots and lots of awesome flips and it was awesome. Taylor was knocked out first by a Swann frog splash. The crowd booed. Swann tapped to a sweet Tigre submission. The crowd booed. Shynron eliminated Tigre with second rope 630 Senton!

You know what? Screw it. Give Shynron the title as long as he uncorks something similarly crazy in the Final. His normal matches don’t always work because he’s all flips. But if you have a mini-tournament based on flippitude? Yeah, that’s his entire life’s purpose. I’m fine with it being validated.

3Peck0 (3.0 (Scott Parker & Shane Matthews) & Archibald Peck) defeated GEKIDO (17 & The Pieces of Hate (Jigsaw & The Shard)) via Submission
Gekido comes out and Jigsaw seemed depressed due to his brother disowning him the day before. That makes sense, right? My guess is that 17 isn’t very good at pep-talks either.

Speaking of Jigsaw, his nonverbal communication is always off the charts. He’s been one of Chikara’s best storytellers since trouble began to brew between him and Mike Quackenbush. While a mask might restrict facial expressions, they do force a wrestler to become bigger with their body language, which in turn better conveys emotion and tells a better story. Remember El Generico? Nobody better, except probably Shawn Michaels.

Jigsaw wanted to start, but 17 and Shard forced him out. Jigsaw was sad. Shenanigans to start. Even Shard busts out some humor. Both these teams are expert storytellers in their own way.

The crowd chanted at Jigsaw, who looked more and more despondent as the match went on. Even as Jigsaw landed some signature moves on 3Peck0, END_OF_DOCUMENT_TOKEN_TO_BE_REPLACED