Patches
So, uhhhhh… how about that noble sacrifice, huh guys?

A week after I subtitled my thoughts “How I Learned To Stop Giving a Shit and Love 24 For What It Is,” here I am to analyze the hell out of things again. It’s indicative of post-S5 24 that I continue to vacillate about each episode and about Live Another Day in general. If 24 could give me some consistency, I could probably return the favor.

But no, 24 copped out of last week’s bold decision, delivering a Jack Bauer-sized dose of revivium. I generally don’t support narrative backtracking, especially when it neuters one of the best episodes of your series.

And that’s assuming it was even possible in the time given. About 90 seconds passed between the time Heller started walking onto the field and Margot getting a positive ID on Heller. So two minutes, tops, for Chloe to finish hacking the drone, call Jack, Jack to come up with and communicate a plan, Chloe to loop the video, and for Jack to sprint out to midfield of a massive soccer stadium and escort an unwilling president off the field.

And if Season 7 stands out due to the (comparative) nuance with which it dealt with the War on Terror, Live Another Day is its antithesis. Not only has it been ham-fisted with its examination of current events (one-line viewpoints and other “and that’s what we think of you, Julian Assange!” moments), but it’s actually making me sympathize with the terrorists. Both sides kill innocents, but while the bad guys are true to their word, the good guys lie and summarily execute completely incapacitated enemies.

This is either shitty storytelling or I’m the world’s bleedingest terrorist heart.

It’s too bad because the rest of the episode was pretty suspenseful and did a nice job setting up for an exciting finish. The shortened season has allowed the writers to create a blistering pace and shed some of their favorite time-killing tropes. However, they’ve also tossed out nuance and basic storytelling along with it. Just a few more pieces of what is rapidly becoming the world’s simplest puzzle.

But why think when you can just do, right? 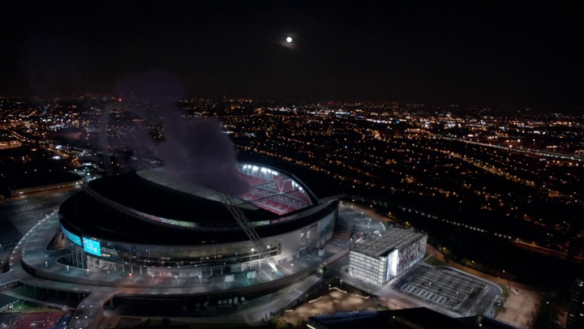 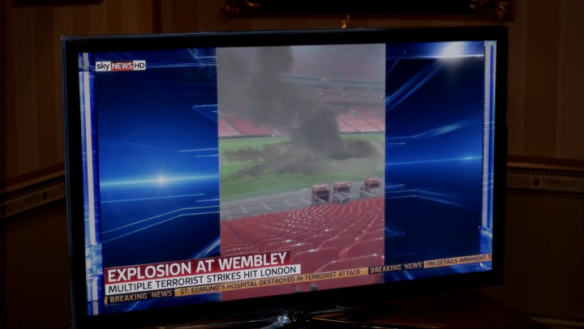 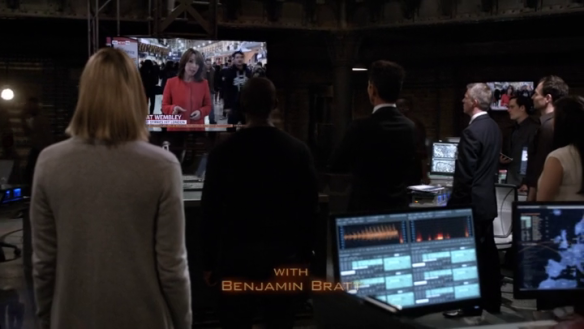 Jeff
Just when I was riding relatively high on this being a “good” season of 24, this shit happens. It’s not that the timing is impossible given Patches’ analysis. It’s not that I can’t fathom how both Chloe and TerrorFamily could manipulate the drone’s camera simultaneously or how TerrorFamily could be looking at delayed video and still maintain accurate targeting. It’s not even that the twist undermines whatever emotional heft the previous episode had. My biggest problem with the twist is what I imagine the writers were thinking when they put this together.

I picture them high-fiving, patting themselves on the back for a twist that would make viewers jump up and down yelling “Whoa! Heller’s alive! That’s awesome!” Do they think we’re that stupid, patronizing us like that? Do they think they’re that clever that the twist really works? Are we that stupid? Are they?

The reveal of an unharmed Heller, so clearly meant to make us shout and cheer with delight instead comes as nothing less than a slap in the face to any viewer who was paying attention to the end of the last episode, particularly those of us who found it moving in any way.

Sure, I hold this show to a higher standard than it often deserves, but this is the worst. Good serialized storytelling, something 24 has regularly achieved, doesn’t allow for reset buttons where the events of last episode have no bearing on the current one. This isn’t a sitcom. Or is it?

Nevermind that shit, there were some decent things in the episode.

It was paced like a season finale, dispatching the bad guy halfway through. This was kind of fun because it kept things moving, much like the Rask/Kate-torture episode I liked so much.

It brought back Kate’s police contact, Ken–planted back in episode 2–to start connecting the dots with dead ol’ Jordan.

It featured Jack defenestrating both Ian and in-custody Margot, something I’m not as down on as Patches because hey, we don’t really know how much Jack has changed in 3 years, and this may be the last we see of him (though I do think there’s a greater discussion to be had here, and I’m sure this execution isn’t going away).

Unfortunately, back at CIAHQ, bad things abound. The override device is now almost an exact duplicate of season 7’s CIP firewall, only instead of infrastructure it controls defense. Ugh.

Jack gets a phone call from Audrey (a character whose current mindset could use some exploration) to say thank you. Why have her do something she already did earlier? To get Jack out of the room so Steve could steal the override of course. Ugh.

Steve steals the override, without being seen and gets away, an “escape from CTU” sequence that feels like it has been attempted or accomplished in almost every other season of the show (sometimes by Jack himself). Ugh.

While I’d say this episode is about half-good/half-bad, the scales are pretty flipping far from even. 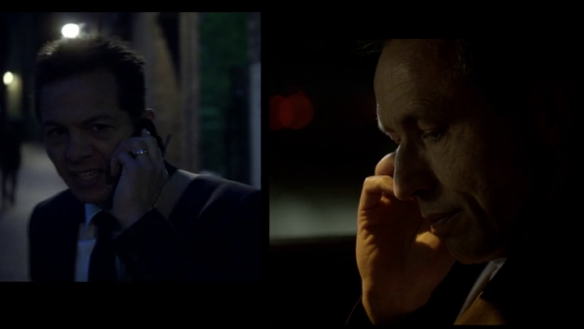 Zach
I take it all back. Having the world’s most faithful servant of Life, Liberty, and The Pursuit drive the President of the United States to certain death at the hands of a better-than-that terrorist was a great idea because

Come the fuck on.

One of the worst moments in the run of the series, in my opinion, was the “exciting conclusion”™ of Aneurysm In Chief Wayne Palmer’s strange decision to bombs-away Nonamistan in Season 1 of 2.4, in which it was revealed that the crazy, inexplicable, unbelievable cliffhanger to the previous episode was actually all just a ruse, and that that ridiculous thing never happened anyway, and holy crap weren’t you surprised! I remember thinking at the time that the writers had run out of ways to work crazy twists into the story, and instead moved on to meta-twists — something so crazy and inexplicable that it wasn’t even tenable, really, followed by some illogical and shocking reveal that walks it back. Thus the story is reverted entirely. It’s like multiplying by -1: if you do it twice, you get back to where you started.

The thing is, if I wanted narrative loops, I’d ask the non-idiots who wrote Primer.

I do think, Jeff, that the writers of the show think that this see-sawing from X to -X and back again will just result in people feeling like they got two huge thrills. And for many a viewer, I think that’s true. But not this viewer, and not you guys, I’m pretty sure. That’s because we don’t want to get where we were. We want to go somewhere new. I resented the “death” of Heller because I thought it was illogical, but I accepted it on the grounds that it was novel. Patches called it bold. It was those things. Having done that bold, novel thing, I had little faith that they would manage to live in that world (of which, I’ll point out, they once were mayor). My little faith was validated, I guess.

I told Jeff before watching this episode that “If they bring back Heller I’ll never watch again.” I guess I’m a liar, because I finished the episode, and intend to watch the next ones as well. But I’m watching them in that same going-through-the-motions way I did with the end of the series. And that’s a shame; only two short episodes prior I was entirely on board.

The rest of the episode was basically pointless on that emotion. I thought the entire raid on the compound was paced exactly as if it had been ripped from a video game — I’m actually so convinced of it I’d bet that one was in development already, or some one thought the video game kicked so much ass they just made a mini-season of 24 about it (wink wink nudge nudge). And I agree, Jeff, Navarro doing what every guy-who-has-to-get-X-and-break-out-of-place-Y has done throughout the run of the series just didn’t do it for me.

At least Jack threw a woman out a window. Defenestration seems to run in the Tully house.

MegaMix
I’m a bit surprised fellas. While watching this episode, one thing and one thing only got me up in arms. JACK THREW A TERRORIST OUT OF A HIGH RISE BUILDING FOR ABSOLUTELY NO REASON!

Maybe it’s just me, but how the fuck did this happen. Yes, Jeff, it’s been 3 years since we last saw our beloved main squeeze JB, but no one wants him to go out like this. If, as we all discussed/hoped at the beginning of LAD, Jack dies at the end of this short run, do any of us want him to be a bad guy? I know I don’t.

So, let’s just break it down for a moment. Bauer kills Ian as an immediate threat coming at him with a gun. JB throws him out the window because it’s probably the easiest and quickest way to take care of the threat. Make sense. Seems like the Jack Bauer we all know and love.

THEN he goes after Margot. Jack could easily apprehend her and continue to be the hero that we expect him to be, but he doesn’t. He grabs her, along with her ethics, and throws her out of the same window as he son.

Margot seemed to be willing to hold up her end of the bargain until the tape loop was discovered. Obviously she’s going to continue, if not expedite, the attack once this plan has been foiled. It’s as though Bauer didn’t think this one through to the ends that he normally would. 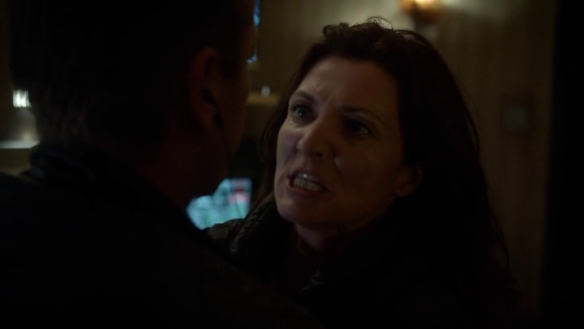 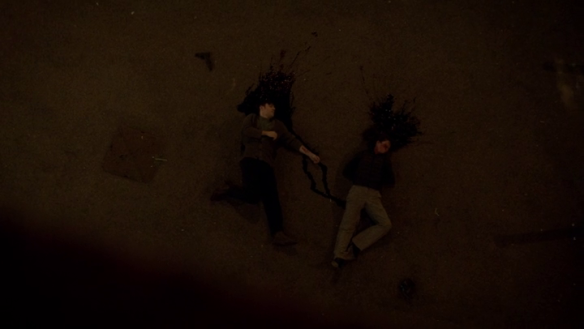 Patches
If Kate is FemBauer, then I am loving the hell out of Erik as POChase. He’s a great sidekick, with the twist that he’s sort of new to Jack Bauering things, so he’s constantly in this state of disbelief that all this shit is happening. If there’s an Academy Award for a “Wait, what?” expression, hand it over to Gbenga Akinnagbe right now.

What’s that? He stole that “Madonna” line from this movie?

Zach
I loved that Belcheck line, and fortunately I never had it ruined by The Good Professor. I guess I’m somewhat excited to see Chloe flapping in the wind between Hack and Jack. So I’ve got that. 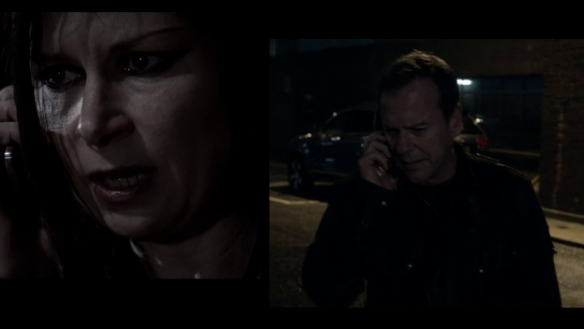 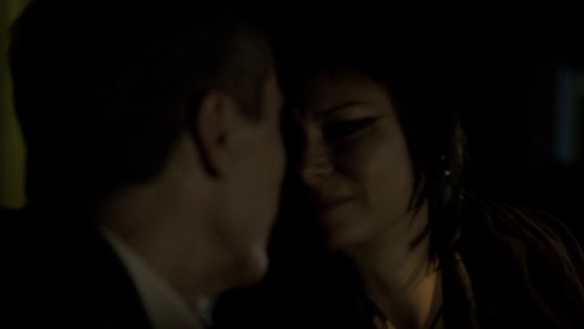 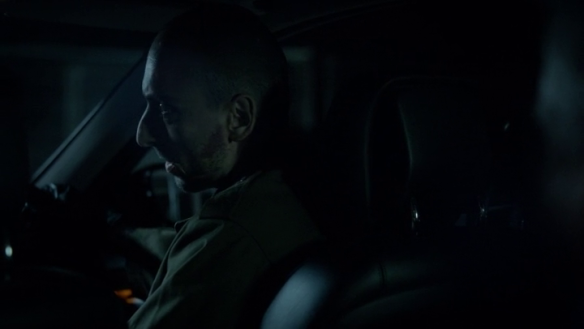 Loved the raid on Terror Apartment

Jack, moments before yet another unnecessary KO

LJ would be proud of that form

I love you enough to demand you die with me, son 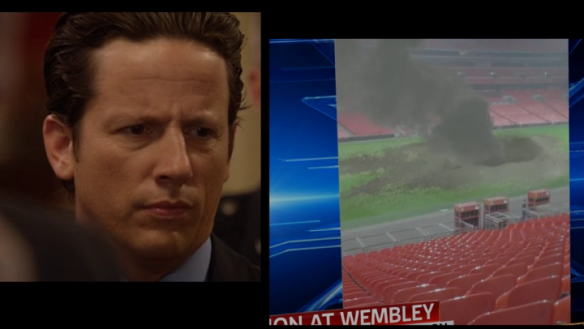 Even this guy is sad

BOUDREAU BE LOSIN’ HIS BOO!