Patches
JACK BAUER SHOT TWO PROTESTERS IN THE LEG TO USE A RIOT AS COVER.

Let me back up a bit.

A concern I had going into Episode 3 was that Live Another Day would lose some of it’s oomph after the novelty of new 24 wore off. Last week, we all expressed degrees of excitement ranging from cautious optimism to 24 IS BACK, BITCHES! But what would happen after the thrill is gone?

I’m still on board. However, Jack’s inability to grieve with Chloe is reminiscent of his hospital conversation with Renee in Season 7. Audrey is still boring as shit, reminiscent of Seasons 4-6. And Catelyn Stark’s terror family brings back memories of Season 4’s Araz Family, especially after they ditched the cool “I don’t like my wife fucking other dudes for the cause” conflict in favor of a more generic “cold feet” angle. I’m sure Jeff, our local 24 historian, could give additional examples.

Worst of all, Jack might be turned over to the Russians and it’s implied that someone in the US government took out Chloe’s family. It’s like Jack’s day can’t just be about stopping a terrible thing from happening. He also needs to evade his own government while doing it. My hope was that they would cut that sort of padding in a shortened season, but I was wrong.

Thankfully, Live Another Day is trying some novel ideas. Station Chief Navarro and Agents Morgan and Ritter seem to be working well together, which is newer to 24 than it should be. Morgan’s spy husband is baggage we haven’t seen before. Also, Yvonne Strahovski is my jam. Jack almost always works with people he completely trusts, so his reliance on Adrian Cross’ assistance is an angle that could have some legs.

Most of all, I’m looking forward to seeing how President Heller handles his Parliamentary grilling, even if Parliament’s Speaker is actor Ken Drury and not a special guest appearance by Labour Party MP Nick Raynsford. We’ve never seen a President on 24 do something like this (their job?) before. We’ll see if his chief of staff is right or if he handles the pressure like Prime Minister David Cameron in this Daily Show clip.

So, boys, I’m still in. However, JACK BAUER FUCKING SHOT UNARMED CIVILIANS TO CREATE A RIOT FOR COVER.

Does this cross the line, gentlemen, or is Jack Bauer Jack Bauer enough to not have a line? 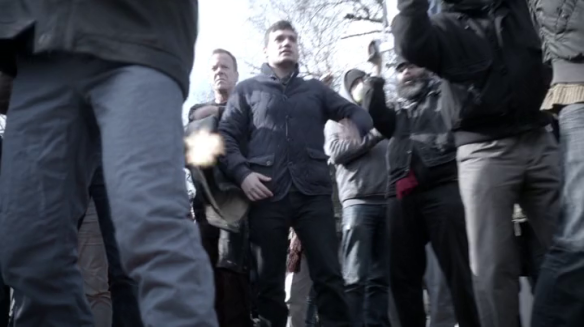 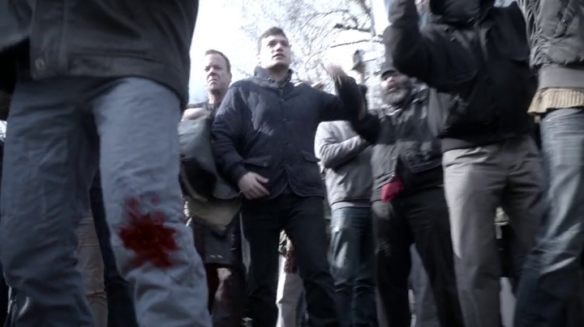 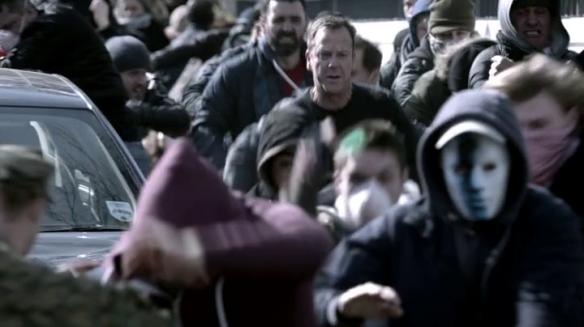 Jeff
Jack Bauer isn’t above hobbling civilians (see Henderson, Mrs.), so I’m cool with him doing it to gain access to the embassy. Especially if he shot nonsensical “you’re either with us or against us!” featured extra. The question is, did he get the gun off of the bobby? I thought they didn’t carry guns. Also, the embassy “break in” was probably my favorite part of this rather slow “setup” episode (Twenty-Bore anyone?), so I’m cool with it.

I groaned a bit when the sentimental music swelled up for Faux-rris and son, just in time for Simone to get away. Clunky exposition time! Rajskub sells the story of her family’s death well enough, but it’s a hard sell for me as I never really cared for Morris and we barely saw the O’Brians as a loving family unit. It helps that Jack hugs her and explains (from YEARS of experience) how to deal with everything you love dying. Of course, it’s mostly just a pep talk, and Chloe basically blames Jack for her family dying without really blaming him. I am intrigued by the idea of a setup though.

Terror-family 2.0 is amusingly awkward and creepy, particularly Margot, who likes to watch. Patches suggests I might find other examples but what more do you need when Behrooz appears, all grown up and married to Simone! What, it’s not the same character? His name’s Navid? Wasted opportunity.

Also wasted: a chance to see Heller deal with Parliament, unless we get to see it next week.

And Mark forging the signature of THE PRESIDENT OF THE UNITED STATES just because he doesn’t want Heller and Audrey to have to know Jack Bauer is alive? Stupid. I don’t care how much he wants to protect his “stop treating me like a fragile bird” of a wife, father and daughter have been through worse.

Lastly, I’ll semi-second the motion that Steve, Kate and Erik function pretty well (I’m not sold on the dudes yet). I’d kind of like to see more of them, but I fear that giving much more to do will make them fall back into rogue/suit/clueless patterns. We’ll see.

It’s not a huge step down from last week’s CIA escape and Yates chase (which I wasn’t as high on as some of my colleagues), but I’m ready for some more Jacktion, maybe a shocking twist or two and the ever-possible surprise return of an old friend. 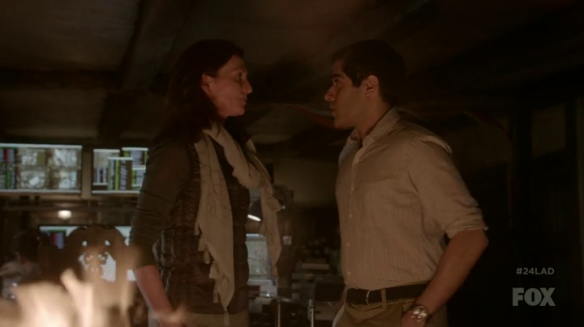 Zach
The haterade coursed through mine veins, and lo! frowns of disapproval were thusly forced upon mine furrowed facade as lamentations rang out from mine deepest heart.

Jeff has an optimistic — or maybe just hopeful — view of the future, and it’s nice to read. It’s entirely possible that this was just a setup episode, and it shouldn’t be judged as harshly as I did judge it. But then what did they set up? Jack got into the embassy, but they could have done that in under 40 minutes. They’ve pulled that off before (like 10 times). It gives Chloe an opportunity to make some hard choices, and that’s an interesting place for her character to be. It provided a way to talk about Bore-is (LOL KILLIN IT) O’Brien and their child Potatoes, AND let the weirdly psychotic daughter escape, AND piss everyone off with music swells, AND build up the inner struggle at which Chloe was only heretofore hinting.

Basically, this episode was a total snoozefest. If we learned anything in the last 3+ seasons of 24, it’s this: if you’ve killed all of the non-interesting non-Jack characters on the show, there’s only one thing left to do, and that’s show Jack doing awesome shit. Shooting a civilian seemed nuts, but Jeff reminded me of his previous attempts at being crazy as shit, so I’ll forgive it. But this next episode better be, you know, fun to watch. If we spend the whole time watching Heller deal with the blowback of walking out of Parliament, and the latest installment of Big Brother: Radical Radicals, I’m going to revert to the “S8 watching just ‘cuz” state. 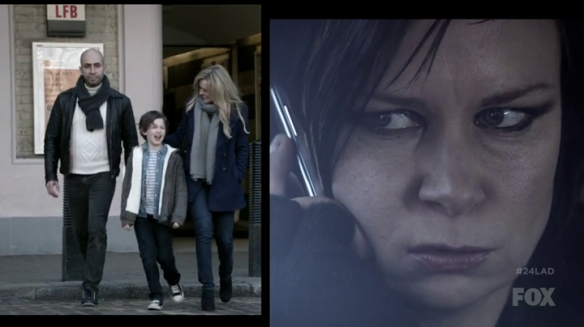 MegaMix
I’ll more or less second everything that’s been stated so far. I realized the episode was slow and boring before the first commercial break and hoped it’d pick up, but to no avail.

First favorite moment for me was the aforementioned Jack shooting random protestors and yelling “GO! GO! GO!” Because, obviously in that situation someone yelling like that is gonna help A TON.

Second favorite moment was (in disagreement with my cohorts) the Chloe reveals “what [she’s] been through” moment. I HATED how it came about and how it allowed the baddie to get away, but I love the moment the two of them have afterwards. NO ONE CARES ABOUT MORRIS, but we do care about Chloe and I think Mary Lynn’s performance in the scene was great. I also liked how clear it was the Jack cared, but at the same time HOW LITTLE EMOTION HE HAD. Guys, I think Jack might be broken.

Other than that, this episode BLAZEH. Along with some of my peers, I’m interested to see how the Heller in parliament fiasco goes. ESPECIALLY since this is clearly the moment Audrey is going to find out that Jack is Liv(ing) Another Day RIGHT!?!?!?. BOm bom BOM! 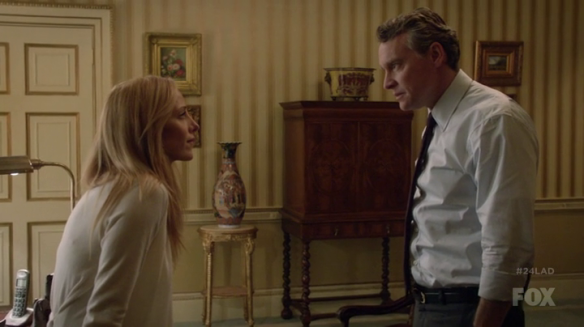 Patches
Rest in peace, Morris. See you in some more video games. 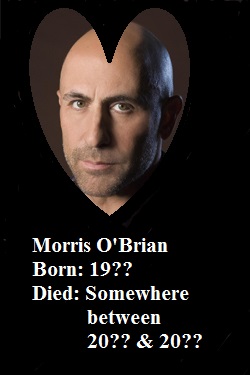 Jeff
This episode seems even more disjointed and unnecessarily hand-holdy because the “previously on” section is 2:20 long and it features EIGHT character name screens, including Chloe’s team, the unfortunately named “Open Cell.” They have their own website though. If the show is so worried about us forgetting who is who, they should just give us an old-school opening credits sequence with actor and character names. Also, missing from the previously on section is none other than Jack Bauer. What gives? 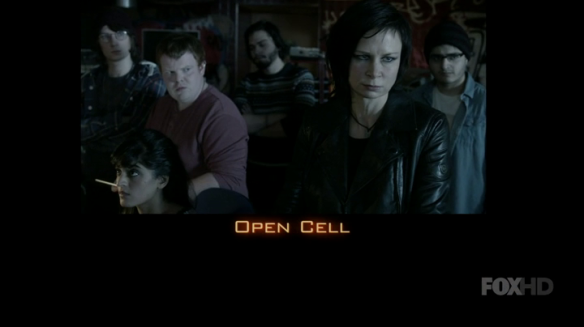 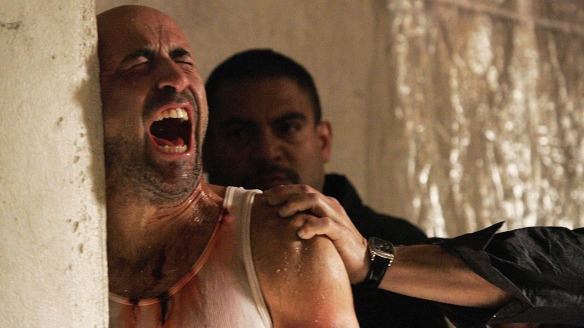 MegaMix
So, what did Kate and Erik do with Basher? One second they’re teasing a beating from the boys across the tracks and the next thing we know Basher’s not in the car anymore. I imagine they just dropped him off at Greggs for a pasty. 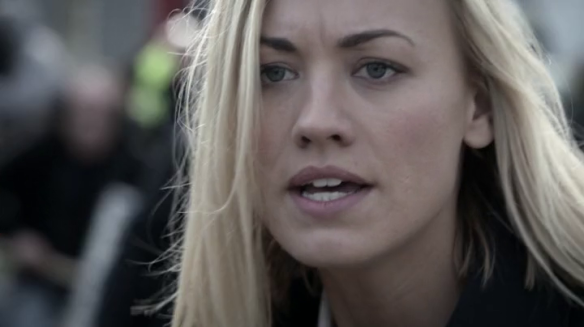