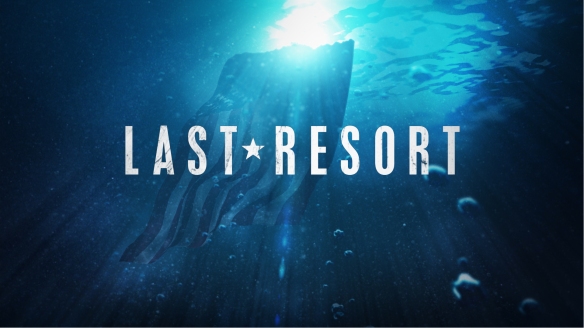 Last September, the television show Last Resort premiered on ABC. The show starred Homicide alum Andre Braugher as the captain of the nuclear missile submarine USS Colorado, given orders to nuke Pakistan. The Colorado is attacked by American forces after Braugher’s character refuses to fire. A chain of events is set in motion that leaves Colorado in control of a nearby tropical island, attempting to expose the truth of the US government’s involvement in the attack.

Despite a favorable critical reaction, the ratings were never where they needed to be. As a result, the show was canceled after thirteen episodes. For a look back at the show, I am joined by my esteemed colleague, Jeff of Slazenger1. After Monday’s series overview, Tuesday and Wednesday’s looks at what worked for Last Resort and what didn’t, we end by handing out some awards. Hope you enjoyed our discussion and thanks for reading!

BEST PERFORMANCE
Patches: Andre Braugher, Andre Braugher, Andre Braugher. He’s, like, the best thing ever.
Jeff: There’s really only one answer to this question, right? Well I’ll let you be right and I’ll be second. I’m actually going to go with Scott Speedman as Executive Officer Sam Kendal (just over Daniel Lissing as James King). Sophie/Sam/Christine love triangle aside, Speedman believably held his own with Braugher, selling his internal conflict and giving us someone to root for who wasn’t hiding something.

WORST PERFORMANCE
Patches: Autumn Reeser throughout the series. Her loud, quirky, military-industrial-complex-with-a-nice-rack didn’t work. Everything she did was like a cheese-grater on my brain. Unless, of course, that was intentional for later developments. If that was the case, move this to “Best Performance.”
Jeff: There’s only one answer here too, and honestly, I’m not even going to try to pick someone different than you here. Autumn Reeser as Kylie Sinclair. Everything was wrong about this character from the beginning. She was a young, sexy weapons manufacturer who liked to unconvincingly deliver speeches about weapons technology in an effort to convince us that she was one of the boys. I’m not saying you can’t have a character like this, I’m just saying it didn’t work as written and, whether a result of the writing or not, as portrayed by Reeser. That said, the dark place they took her in the finale was interesting, but just too little and obviously too late.

BEST SUPPORTING PERFORMANCE
Patches: The only supporting performance that really resonated with me in either direction was Gideon Emery as CIA Operative Booth. Maybe it’s because he was the only supporting character to get a great one-on-one character development scene, but it was tough not to be impressed with his manipulation of Kendal, all the way until his last moments, when he asked Kendal to speak his real name, not his CIA cover, before he was killed.
Jeff: I’ll gladly second the motion on Booth, but I’ll go ahead and pick Michael Mosley as Hal Anders. He started out as conflicted, then became a bad guy, then became a cartoon, but at least he had an arc and gave Chaplin someone to kill in the finale. Shout out goes to William Rothhaar as Josh Brannan who also had a nice arc, but often got lost in the shuffle of white guys with short hair.

WORST SUPPORTING PERFORMANCE
Jeff: I don’t know. I’ll just go ahead and nominate Colby French as Captain Evan Thorn of the USS Patrick Lawrence (“Damn the Torpedoes”). It’s not so much on him as on the writing. What a wasted opportunity to have two captains square off for an entire episode.
Patches: Dichen Lachman as Tani, bar-owning islander and romantic foil for the excellent Daniel Lissing’s SEAL, James King. Jeff, I’m going to quote you and leave your thought hanging. “Sorry Tani, you’re worse than annoying. You’re useless.”

MOST IMPROVED
Patches: Daisy Betts as Grace Shepard. In the beginning, she was little more than a combination of the Action Girl and Iron Lady tropes. By the end of the series, her character picked up a third dimension and had a nice little sarcastic thing going on.
Jeff: Hard to give it to anyone other than Daisy Betts, but I’ll make a case for Robert Patrick as Chief of the Boat Joe Prosser, even if it just means that my view of him improved, not necessarily his character/performance. He started and ended the series as the stereotypical hard ass, casually sexist and bursting with honor/duty. As the show progressed, he didn’t change all that much, but I began to accept his character as something slightly more than just a stereotype. I think it helped that his character was so closely involved with Betts’, and helping her to grow. The less said about his painkiller addiction, the better.

BEST EPISODE
Patches: “Controlled Flight into Terrain.” The series finale was really the only episode that successfully combined action, character development, AND emotional weight. One of my favorite finales ever.
Jeff: The finale definitely wins it for me as well, but I’ll give a nod to episode 9, “Cinderella Liberty.” I’ve already mentioned it above as an episode that handles the big reveal of what the SEALs were doing in Pakistan very well. Flashbacks to that story alternate with the story of the Pakistani’s taking over both the Colorado and the ship bringing the crew’s families to the island. I think it all fits together quite nicely and was one of the least rushed and best structured episodes of the show.

WORST EPISODE
Jeff: Episode 6, “Another Fine Navy Day.” Where to begin? My major complaint about this episode is the way it’s structured. It starts in media res, which is something that always makes me cautious, giving us the ridiculous title “Three hours after the CHEMICAL attack,” with chemical in big red letters. The worst part is, there is absolutely no compelling reason that I could find for the episode to be structured this way! It’s needlessly confusing, something less than artistic, and it overshadows any potentially interesting or integral story developments included in the episode (like the theft of Chaplin’s nuke key).
Patches: “Damn the Torpedoes.” An episode about naval combat written by someone who doesn’t know anything about naval combat? What could go wrong! This episode was a disaster even if we ignore the jarring scene changes and out of place musical editing.

PLOT THREAD THAT SHOULD HAVE BEEN RESOLVED/EXPLORED
Patches: The President. Why did we nuke Pakistan? What was the Constitutional crisis they referred to in the beginning? I dig geo-politics, so I would have loved that.
Jeff: I’ll repeat what I already said above and cry for more development in Washington. If we were even going to set foot on the mainland, we needed to know how this entire crisis (not just the Colorado, but Pakistan as well) was impacting the nation/world. It’s not enough to have Jay Karnes chew the scenery a bit or have Michael Gaston be Michael Gaston-y. We need another side of the story and we need to know that Chaplin’s actions are in some way justified. I know this could take away from the shades of gray surrounding Chaplin, but we needed more information, if not a stronger antagonist outright.

PLOT THREAD THAT SHOULD HAVE BEEN LEFT ALONE
Jeff: Rape. I’m not saying it isn’t an important subject, and I’m not saying that the show shouldn’t have dealt with it at all, but I don’t think the show handled the subject with the appropriate depth and sensitivity. I think it just happened too early in the show’s run. Last Resort was still establishing itself and couldn’t properly focus on the rape trial without so much other stuff getting into the way. There are a few things that feel forced in and unexplored, including the incident in Lt. Shepard’s past. Had we known these characters a little longer and had the show been more interested in character exploration and less interested in constantly moving forward, they may have produced a powerful hour of dramatic television. As with many aspects of Last Resort, they had the right idea to try something big or important, but the execution left something to be desired.
Patches: Everything Christine. Kim Bauer, Season 2. Need I say more?

REVIEWER’S CHOICE
Jeff: Best Awkward Moment that Probably Should Have Been Left on the Cutting Room Floor – Lt. Cahill’s (Daniel Bess) slide down a railing/ladder in  the Colorado to deliver a message to Chaplin. It’s hilariously awkward and doesn’t fit the tone at all. For those of you care, it’s in episode 11 (“Damn the Torpedoes”).
Patches: Worst Undercover Operative – When XO Sam Kendal (Scott Speedman) went to Manila to track down Christine, he wore a hoodie to stay incognito. Everyone else in the bar was dressed in shorts and tropical shirts. If you are the only one wearing a hoodie, are you less conspicuous or more?